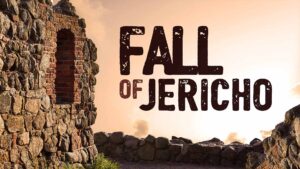 Good afternoon ladies and gents!   Pastor Chris here at WCCC starting my first ever blog(who would have ever thought?)   This will be a once a week blog where I might talk about most anything that is scripture related.  I’m kinda nervous to be completely honest because I have absolutely no idea what I am doing.   Oh well, here goes nothing!

Joshua was a powerful warrior.  A man of action.  A man who was used to getting things done.  This was a greatly admired trait during that time and all the way up through the western cowboy era.  Now days,  it doesn’t seem like people care about getting things done or even being reliable with their words but that’s a question for another day.   Joshua is sent by God to take down the stronghold of Jericho.  While Jericho was extremely well fortified, it was not that important as a military base.  Not such a big deal to Israel but Jericho was to God.  Just because something or someone seems to not be that big a deal to us,  God might just have other ideas.

Joshua was told to march the entire army of Israel around the walls of Jericho each day for 6 days and then on the 7th day: 7 times!  Much like a colt in a round pen, this might seem like a waste of time.  You wonder if Joshua hung his head as the army of God marched while the city laughed.  I don’t think so.  Joshua knew then what we all have to learn now and forever.  Just because God sends you on mission and you don’t understand it, don’t worry and just keep circling!  Lots of times, God will send you on a journey and while you might think you are just turnin’ circles: don’t worry!  God has got you and everything else under control.  Just like those colts in a round pen don’t understand why they are turnin’ circle after circle and they might not think they are getting anywhere, there will come a day when they will see differently.  Just as when you think God has gotten you turnin circles, it seems like you are stuck and not moving, just keep circlin!  God has a plan for you just as He had for Joshua at Jericho.  We have to show God we are willing to do what He asks before He can send us on mighty missions.  Just as Joshua had to prove that he could do what he was told, so you will have to do the same at your Walls of Jericho.  Just because you can’t see around the walls,  keep circlin!  Keep prayin’!  God has got a plan for you and your Jericho.   Are you willing to circle for it?